A few of the Writers who have stayed at The Bowers House:

Alison Hawthorne Deming is author of four poetry books : Rope: Science and Other Poems, winner of the Walt Whitman Award of the Academy of American Poets; The Monarchs: A Poem Sequence; and Genius Loci.  She has published three nonfiction books, Temporary Homelands, The Edges of the Civilized World, and Writing the Sacred Into the Real.  She has completed a new nonfiction book titled Zoologies: on Animals and the Human Spirit.  She co-edited with Laurent Savoy The Colors of Nature: Essays on Culture, Identity, and the Natural World, reissued in 2011 in a new expanded edition.  Her work has been widely published and anthologized, including in The Norton Book of Nature Writing, and Best American Science and Nature Writing.   She grew up inConnecticut and now lives in Tucson, Arizona and on Grand Manan Island in New Brunswick, Canada.  Deming is Professor in Creative Writing at the University of Arizona.  Recently she worked at the Jacksonville (FL) Zoo and Gardens as poet-in-residence as part of a national Language of Conservation project.

Playwright Cedric Liqueur performed his one-man show, “Satchel” Paige, at the Bowers House on April 4. The play was written during a recent writer’s retreat Liqueur took at the Bowers House.Satchel Paige, considered the greatest pitcher in the history of the Negro Leagues, went on to play in the Major Leagues and in 1971 he was the first player from the Negro leagues to be elected to the Baseball Hall of Fame.  Cedric Liqueur, a member of London’s Royal Shakespeare Company, writes and performs theatre-stage plays, prose, narratives, poetry, and sonnets. 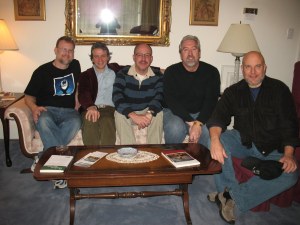 We had a terrific time at the Bowers House.  There’s a good energy about the place.  We all agreed that we got more done over that weekend than some of us had for many months. ~ Steven Shields